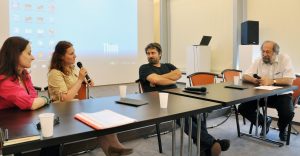 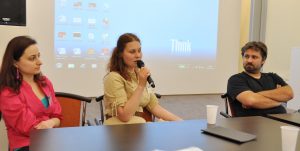 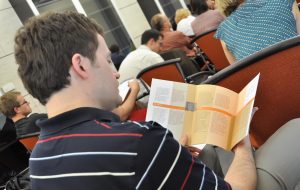 The 10th Res Artis Regional Meeting and International Conference took place in the second biggest city of Hungary, Debrecen. The aim of the conference was to foster the field of artist residencies and residential art centres of Eastern and South Eastern Europe. In many of these countries residential initiatives are formed by individual artists, groups of artists, governments and cities. As most of the members of Res Artis are European-based organisations functioning in a many ways established field, the openings, support and forming of networks towards the neighbouring new scene of contemporary art in Eastern and South Eastern Europe remains more important than ever.

The host organisation of the meeting, MODEM Centre for Modern and Contemporary Arts is one of the largest and most up-to-date art centres of the country, opened in autumn 2006. The centre organises mainly modern and contemporary fine arts exhibitions, but besides, other artistic events such as dance, music and theatre performances are also being held in addition to the museum-pedagogy workshops, lectures and conferences. MODEM possesses the geopolitical position, size and architectural capabilities to be the centre for modern and contemporary art life in Hungary and a bridge to the neighbour countries Slovakia, Ukraine and Romania all within 50 km distance.

The designated new director Krisztián Kukla was present during most of he panel discussions and showed interest for a periodical event in the premises of MODEM.

Eszter Kövesi did a great job organising the event and deserves the gratitude of all participants and especially of Res Artis.

The meetings gathered together a group of about 70 people representing residential art centres, emerging residencies, art and culture foundations, networks and managers of cultural institutes in services of their foreign ministries. The meeting succeeded in creating a network of friends – may the reason be the relativel ysmall number of partcipants or shared interest. The participants described the meeting to have been an intimate, personal and sharing encounter of colleagues.

Participants from countries like Romania, Bulgaria, Serbia and Russia, in which the field of residencies is either completely missing or structurally chaotic, brought by their insights important value for the conference. The longest distance travelled participants from Australia and tgheir considered more than worth to come. One of the most interesting delegations was the one from Israel.

Horizons – perspectives of artist in residencies

The theme of the meeting invited to learn about horizon-widening that residencies enable and artists undertake. Quoting the invitation brochure:

The horizon is the apparent line that separates the earth from the sky, the line that divides all visible directions into two categories: those that intersect the Earth’s surface and those that do not. At many locations the true horizon is obscured by trees, buildings, mountains, etc., and the resulting intersection of earth and sky is called the visible horizon. In the Great Plains the true horizon is not obscured by anything. The visible horizon is the true horizon. You have nothing to lean your eyes again. Like in Hortobágy, the national park and part of world heritage, not far from Debrecen.
Artists in residence change their horizon by moving to another country. They widen their horizon by encountering other people. This is a major step in discovering their own identity. In mirroring others they realise what is characteristic for themselves what makes them differ from others. Artists in residence encounter the unknown in others and within themselves. They discover the apparent line in the external and in their internal landscape.

The workshop for emerging residencies, ResSupport was lead by board members Karol Frühauf and Leena Vuotovesi, as well as the head of the RA office, Mark Vennegoor. The tree-hour session on practicalities of establishing a residency program was not enough to cover the theme. However, the 10+ participants were glad with the information they obtained and enjoyed the discussions very much. They are looking forward to the supporting material for emerging residencies, which will besend out to everyone. The interactive session of the workshop comprised the viewing of the mission and vision for the program as well as the special values of the individual residencies. Raising discussion on the reasons why the participants want to establish a residency program hit to the basics of hosting the other: life-long dreams coming true and wish to the important messages arts contain, are true values behind the programs being developed.
Also during the conference discussions vent on with the participants of the Res Support workshop and with persons who did not manage to join the workshop but are in the process of establishing a residence.

Under daily themes of “Different AiRs – different disciplines, different models” and “Cultural and artistic mobility” the meeting raised active discussion on the possibilities and importance of residential programs.

The AiR perspectives discussed in the panels where among others:

Specially delightful was the active participation of representatives from ie

The present cultural institutes – Britsh Council, Institute Français, Polski Institut –indicated the importance on the matters of the conference. Although the budget of these institutions is rather limited they are capable and willing ot use their network to facilitate artists exchange. The two days presence orf the Dutch cultural attaché underlines the interest of officials in the Res Artis activities. All these officials as well as representatives of the supportative bodies like the European Cultural Foundation had surely messages to take home from the meeting.

Ideas for future development of the field in Eastern and South Eastern Europe were initiated by the Dutch Embassy in Budapest in form of suggestion of residency contact person working specially in this region.

Res Artis takes your privacy and the protection of your personal data seriously and acts in accordance with the EU General Data Protection Regulation (GDPR).

Our Privacy Policy explains how personal information is collected, used, stored and disclosed by Res Artis. This Policy applies to Res Artis members and non-members. Our subscribed members share their professional identities, engage with our network, exchange knowledge and professional insights and post relevant professional profiles and residency opportunities. The content and data of some of our services is viewable to non-members.

Res Artis takes your privacy and the protection of your personal data seriously and acts in accordance with the EU General Data Protection Regulation (GDPR).

Our Privacy Policy explains how personal information is collected, used, stored and disclosed by Res Artis. This Policy applies to Res Artis members and non-members. Our subscribed members share their professional identities, engage with our network, exchange knowledge and professional insights and post relevant professional profiles and residency opportunities. The content and data of some of our services is viewable to non-members.

These cookies are essential in order to enable you to move around the website and use its features, such as accessing secure areas of the website

These cookies are used to deliver adverts more relevant to you and your interests They are also used to limit the number of times you see an advertisement as well as help measure the effectiveness of the advertising campaigns. They are usually placed by advertising networks with the website operator’s permission. They remember that you have visited a website and this information is shared with other organisations such as advertisers. Quite often targeting or advertising cookies will be linked to site functionality provided by the other organisation